You may have read about the GPS collars that our rangers and partners attach to elephants. Have you ever wondered why we do this? In simple terms, these GPS collars are one of the most effective ways for ranger teams to know where elephants are and where they might go next. Our project partner Forum Konservasi Leuser (FKL) recently installed GPS collars on two female elephants within just three days. A mighty feat indeed!

But why do we need to track and predict where elephants are?

The home range of Sumatran elephants is becoming increasingly fragmented as forests are cut down for agriculture, monoculture, settlement expansion and mining. In the Leuser Ecosystem, where our partner FKL works, elephants sometimes cross roads and enter the community’s plantations, villages or farms, often stopping there looking for food. Occasionally they damage community huts or homes, and this can lead to Human-Elephant Conflict - HEC for short - as people fight back against the elephants.

FKL has three Elephant Patrol Teams (EPT) who are deployed in two different parts of Aceh: Aceh Timur and Aceh Tenggara. At the end of last year, they installed GPS collars on two wild female elephants, which allows the team to track movements of their herds. This information is then used by their EPTs to give warnings to the community and to conduct conflict prevention and mitigation operations. The satellite monitoring through these GPS collars is pivotal for the team to mitigate human-elephant conflict in these regions.

Together with BKSDA Aceh, the local community and other organisations, FKL installed GPS collars on Ati and Rosa, who are from two separate herds. Ati's herd consists of approximately 36 elephants while Rosa’s is approximately 32, so estimates are that about 70 elephants are now being monitored and protected through just two GPS collars.

Ati is about 25 years old, while Rosa is about 35 - 40, and both are in good health. The great news is that they found that Ati was pregnant and Rosa was suckling an offspring. After the collar installation, blood samples were taken and they were found to be low in some proteins, probably because they were either pregnant or feeding a youngster.  The day after she was collared, the GPS showed that Ati was moving back towards a forested area.

With these two additional collars, FKL is now monitoring approximately 114 elephants: four herds in Aceh Timur via three  collars and one herd via one collar in Aceh Tenggara.

These missions can be quite challenging at times, especially when you consider an adult female elephant can weigh over 2.5 tonnes! You can also see below the steep, muddy and challenging terrain the team has to trek in order to find the elephants before they can collar them.

You can help support this vital work with a donation to our elephant monitoring and patrol teams.

Below you can see the team trekking for and installing GPS collars on Rosa (first row) and Ati (second row). 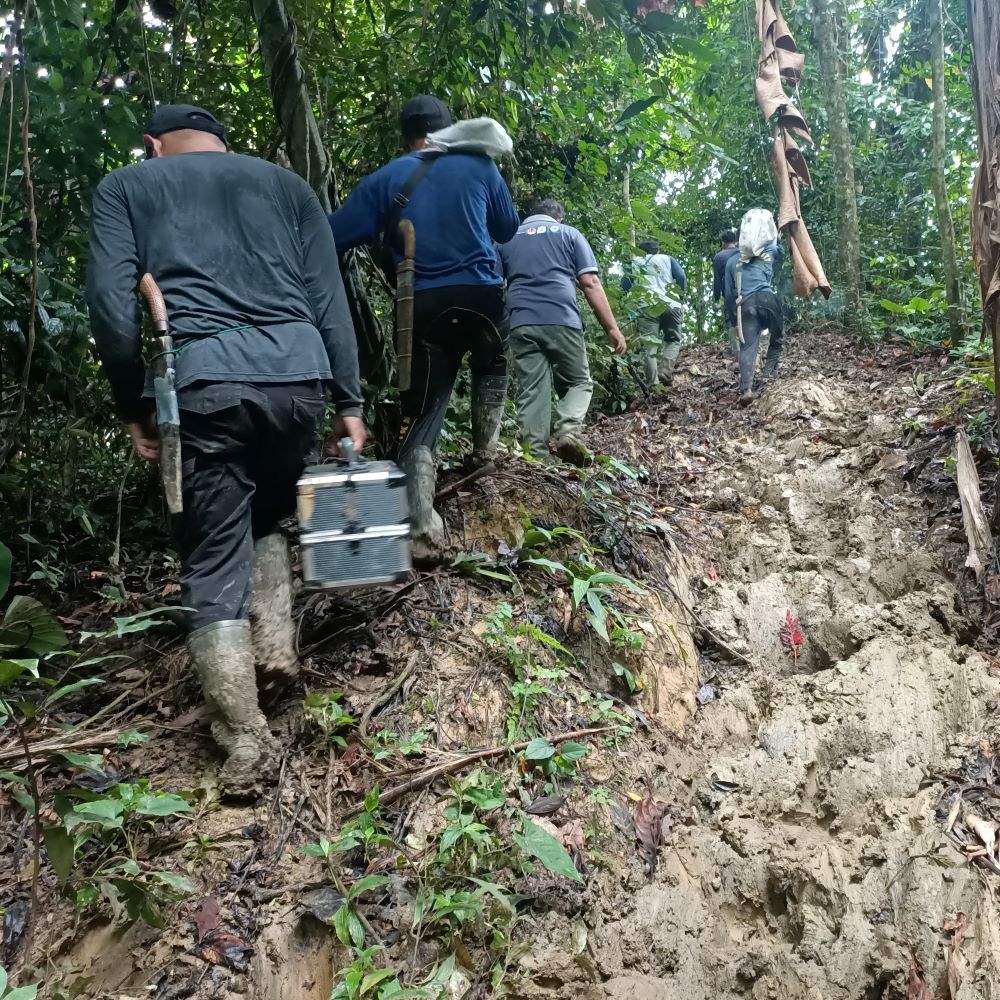 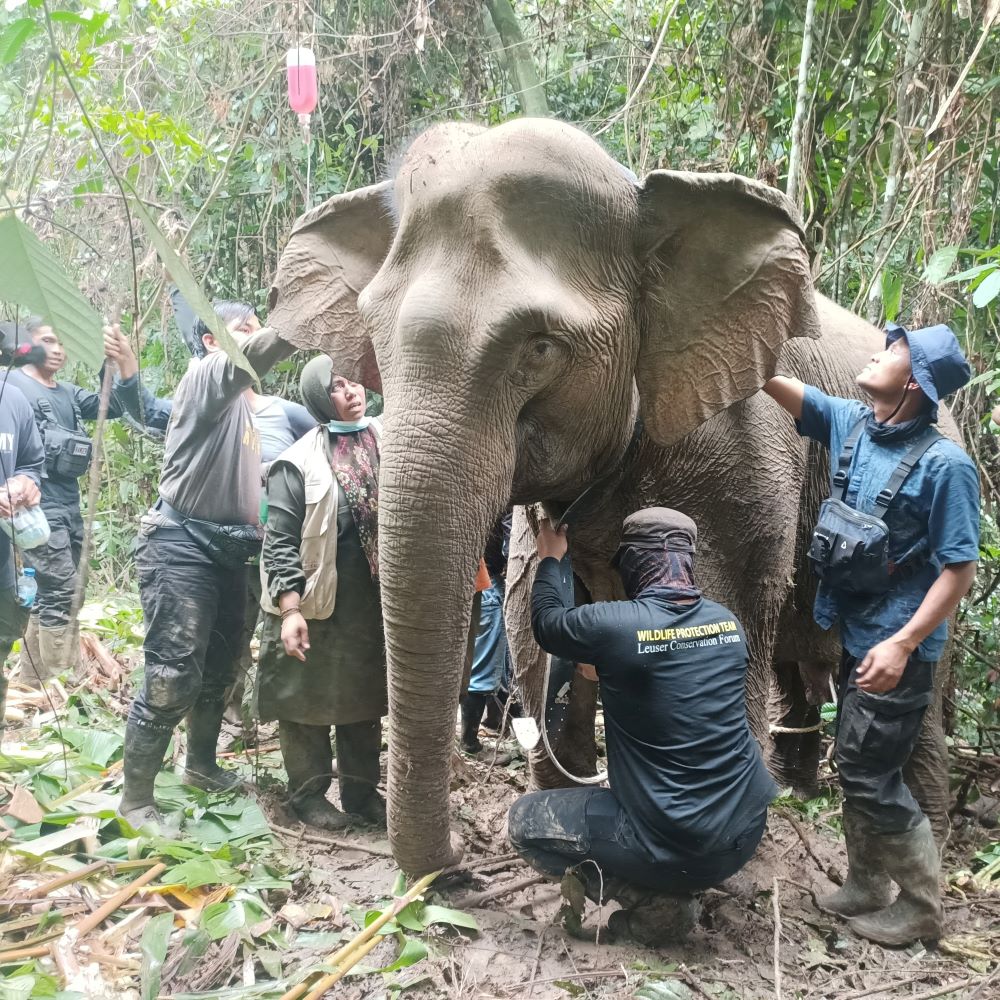 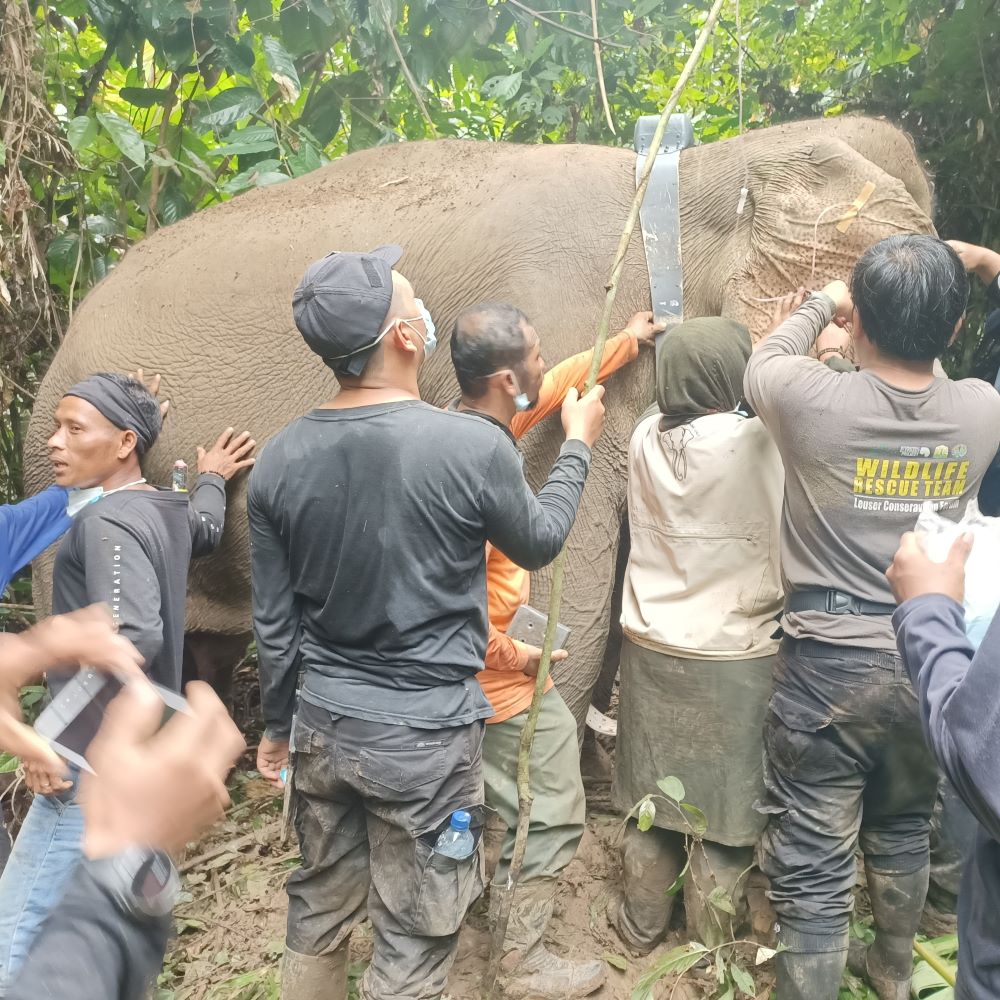 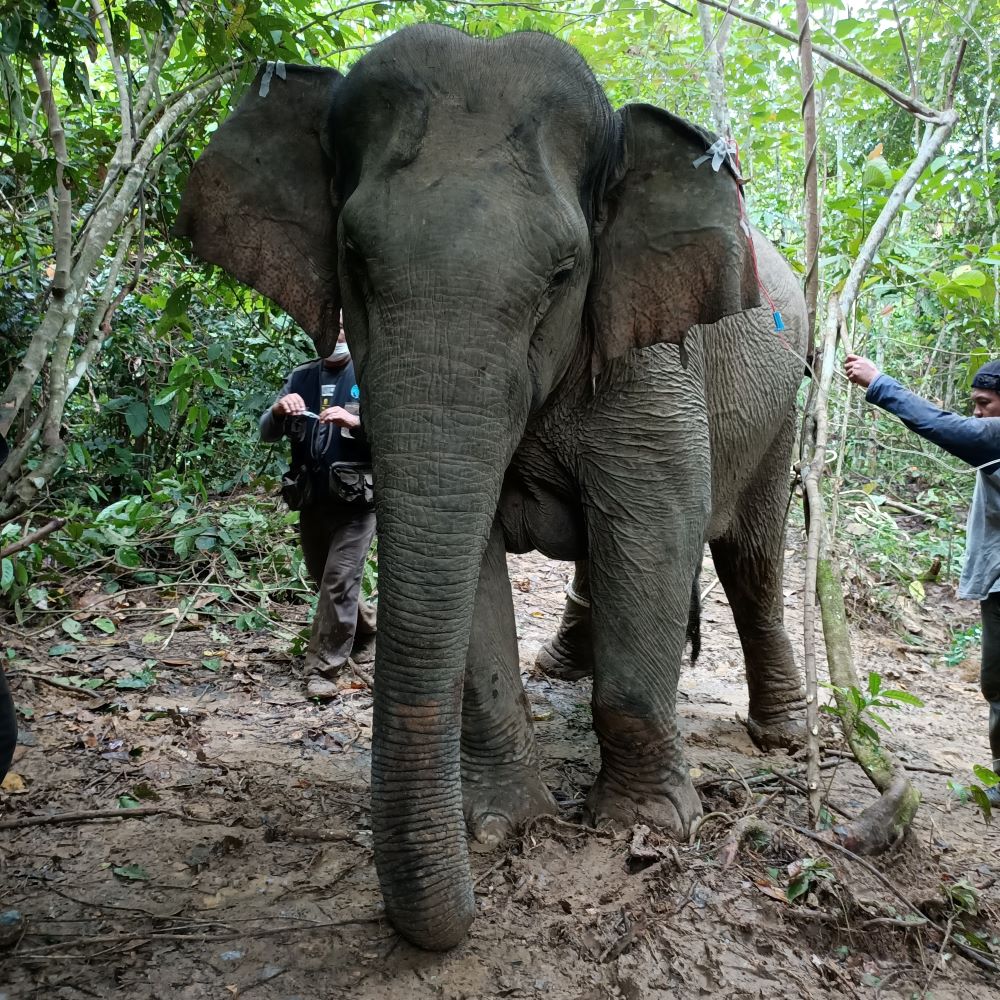 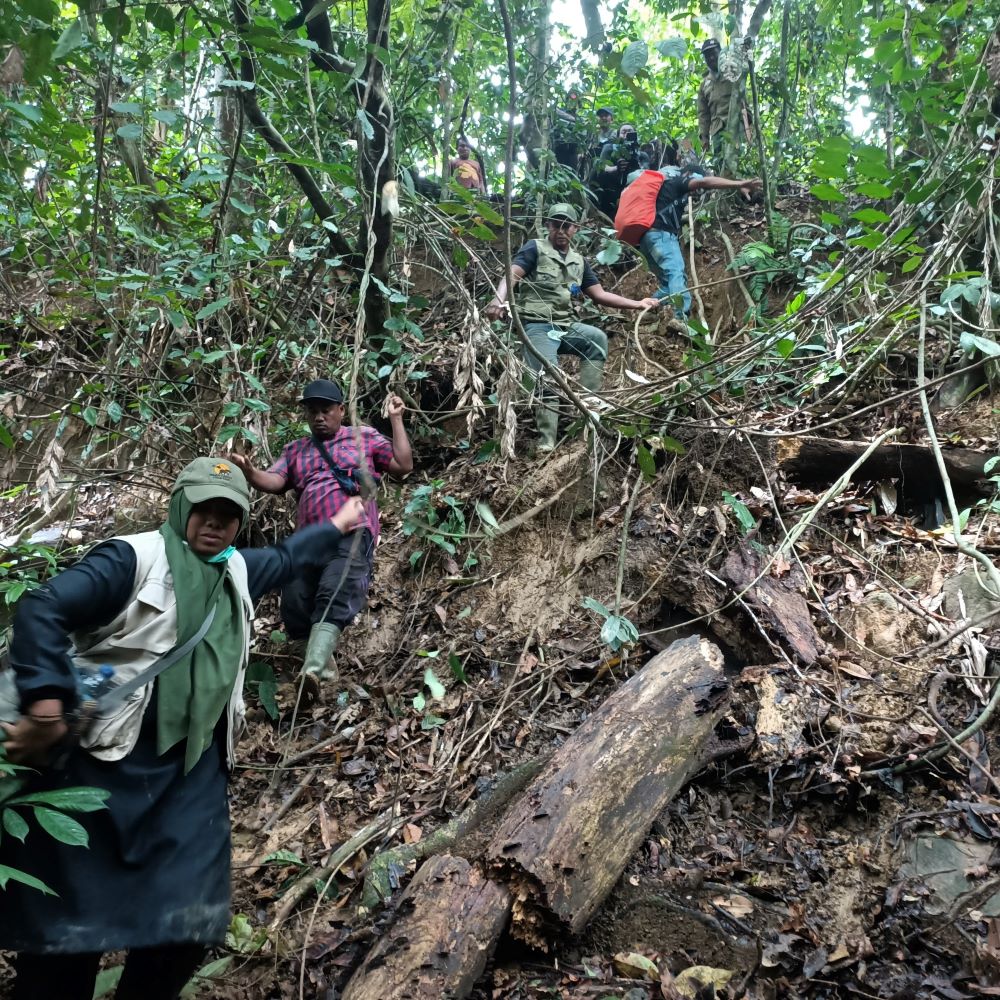 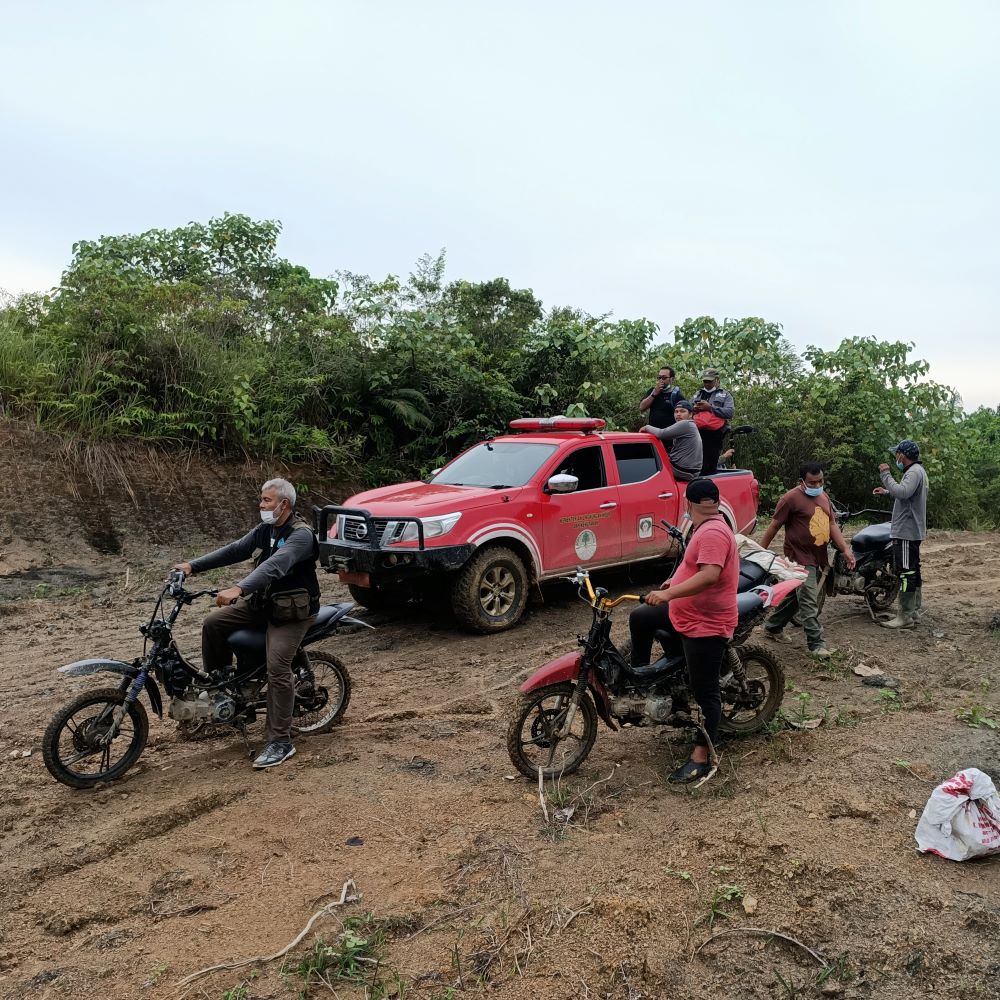