Young Dilan was rescued two years ago in February 2020, after being found by locals in the heart of the forest with his front right foot trapped in a rope snare. As you can see below, his foot was nearly severed by the snare, and he would have died without urgent medical assistance from the Wildlife Ambulance we support. Read on to find out more about his rescue and how he’s going now. 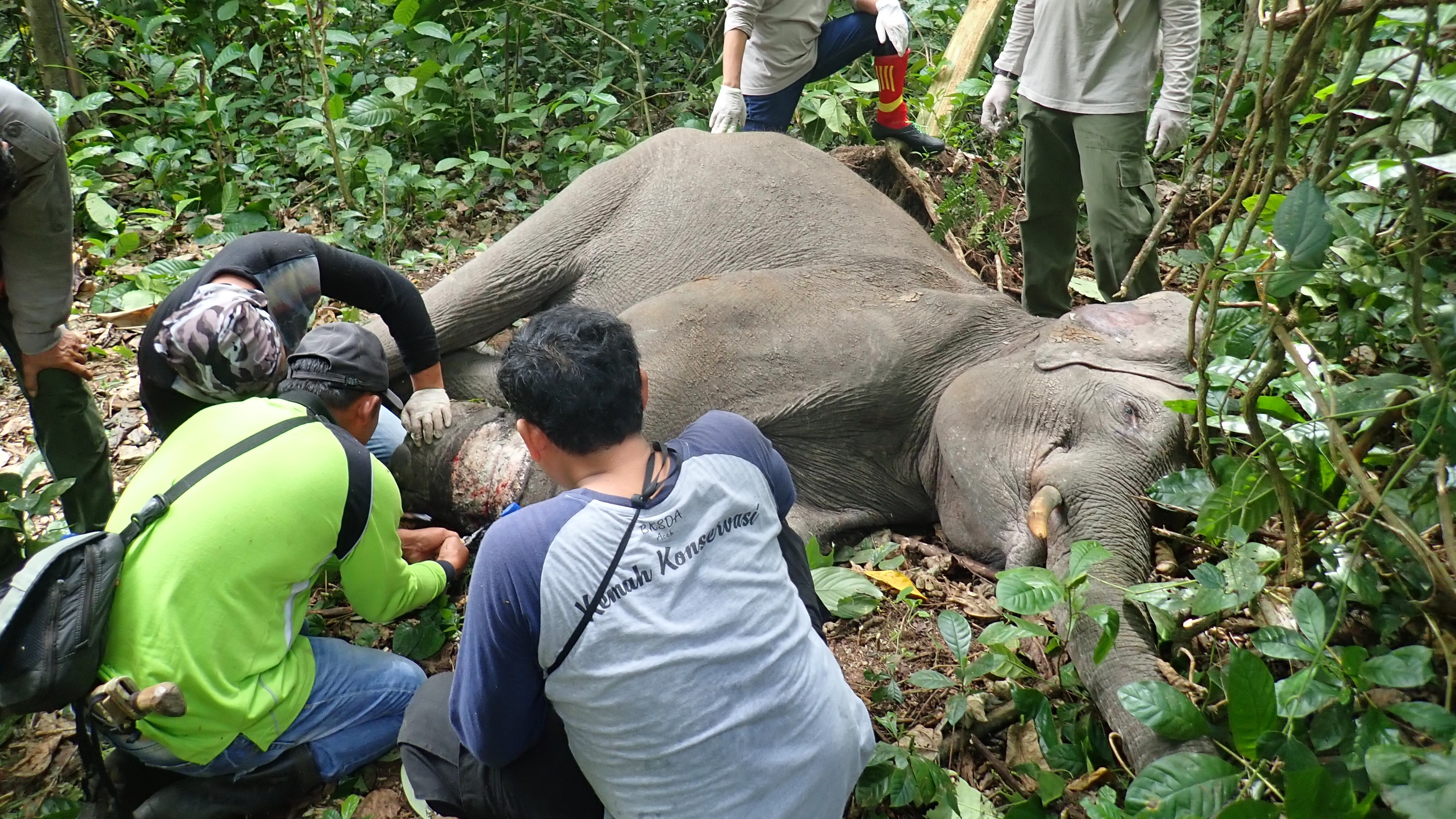 In February 2020, the Wildlife Ambulance was requested by the BKSDA Aceh (local authorities), to help with the urgent rescue, evacuation and treatment of a wild male Sumatran elephant calf estimated to be about five years of age. The snare was still embedded in his foot and had cut deeply through skin, muscle and between bones into the carpal joint. First, little Dilan was sedated and then the team removed the snare and provided first aid treatment right there in the jungle.

In late February, Dilan was transferred to the Elephant Conservation Centre Saree in Aceh to continue his care and treatment. The Wildlife Ambulance team has continued to return to the ECC Saree to assist with follow up treatments for Dilan and other elephants who live there. Below you can see a series of photos from October 2020, showing how Dilan’s foot continued to heal with the care and attention of the Wildlife Ambulance team, the BKSDA and the carers at ECC Saree.

You can see Dilan's rescue in the middle row of photos below.

The Wildlife Ambulance returned to ECC Saree to check on all the elephants there, and recorded that Dilan had put on 300 kilograms. This was great news and showed he was eating and recovering well. Not only that, his scar looked very healthy, showing his skin, muscle and bones had continued to heal. However, due to the scar tissue and the stiff joint, there is still quite a bit of swelling on his foot.

In the top row of photos below you can see the October 2020 update showing how well Dilan's foot recovered in just seven months.

As you can see in the photos below, Dilan has a small rope around one of his back legs. As Dilan is still healing and it’s not safe for him to return to the wild now (or maybe ever), it’s necessary to keep him at the ECC Saree. The ECC Saree is not large and is surrounded by farmland. If he were to roam completely free, he would soon move into crops and possibly destroy them, which could lead to conflict between the farmers and Dilan.

However, his life is not one of complete restriction. Several hours each day, Dilan is taken to a patch of nearby forest to graze. He is also cared for by a mahout, and when he’s with his mahout he is able to move freely to bathe or graze grass. Sadly, Dilan’s life will be forever restricted because of his snare injury. He’s been rescued, cared for, and is healing well, but he may always be a sad casualty of illegal poaching.

Due to his extensive injuries, Dilan is still in human care as he can’t move safely around the jungle on his own. His herd has also no doubt moved on and it would be incredibly difficult to find them and return him to them. At this stage, it’s doubtful that Dilan will ever be able to be released into the wild. However, he still has a long way to go in his recovery, so as he grows older and continues to heal, there is still a slim possibility he may one day be wild again. In the final row of photos you can see Dilan is looking healthy and well, enjoying his feeding time.

Dilan is a casualty of illegal poaching and the practice of leaving rope or wire snares in the forest to trap animals such as wild boar, elephants or tigers. The only way we can prevent more elephants like Dilan from becoming injured and living a restricted life is to continue to patrol the forests and remove these insidious snares.

Please donate to our Wildlife Protection Units today to help us continue to monitor and protect Sumatran elephants and keep them in the wild where they belong. 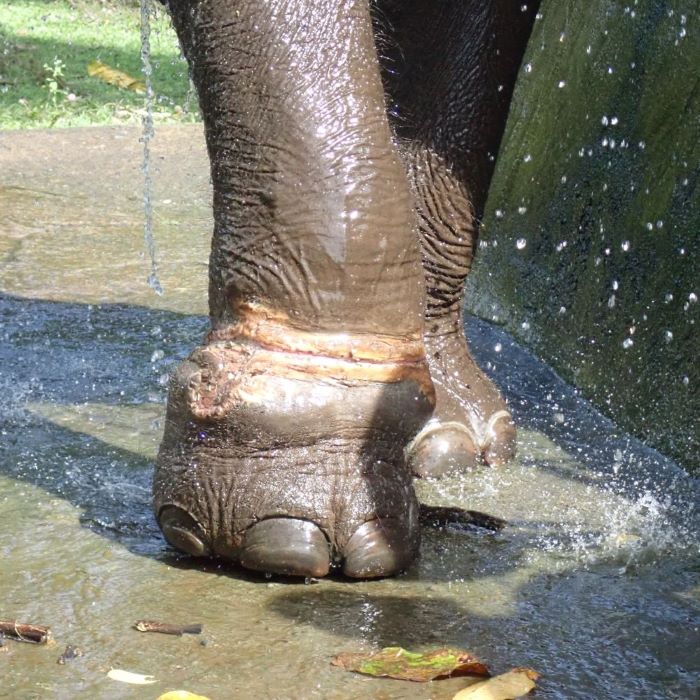 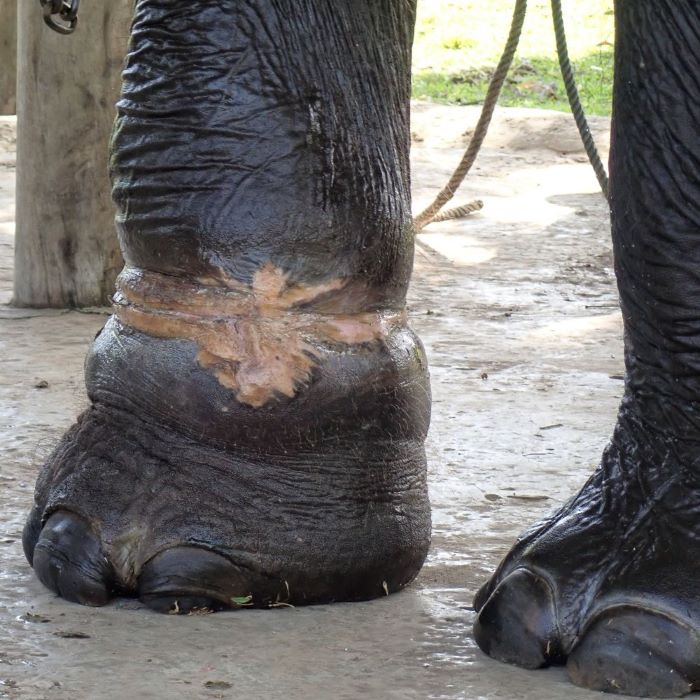 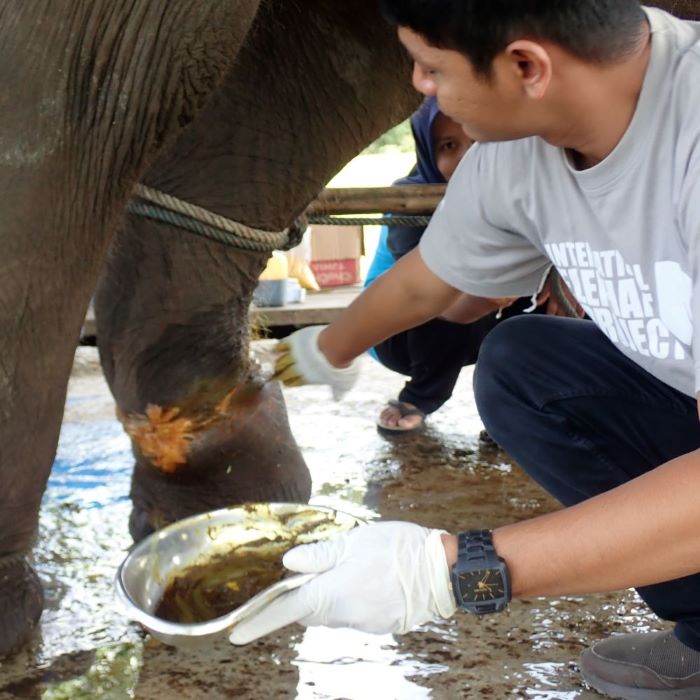 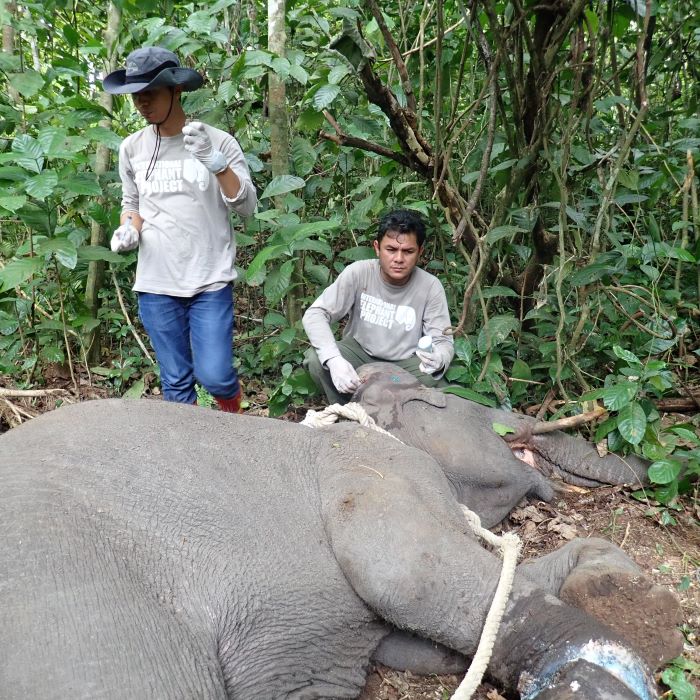 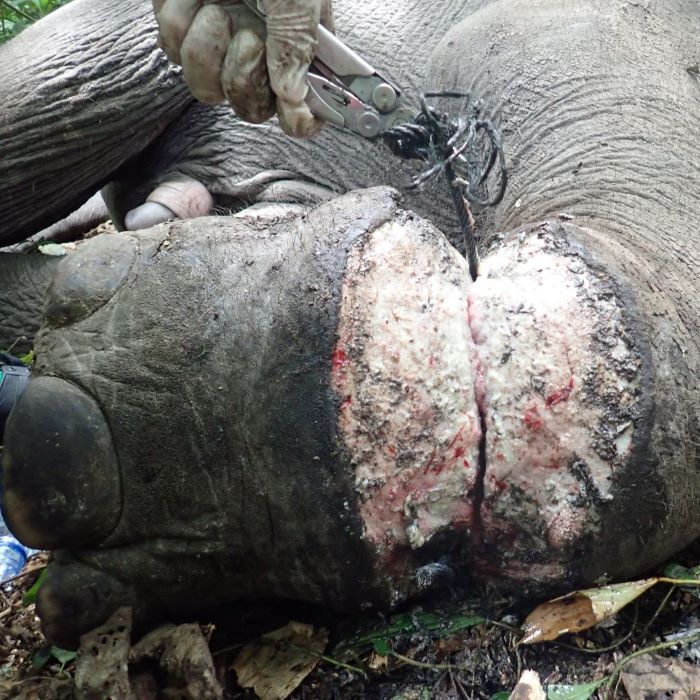 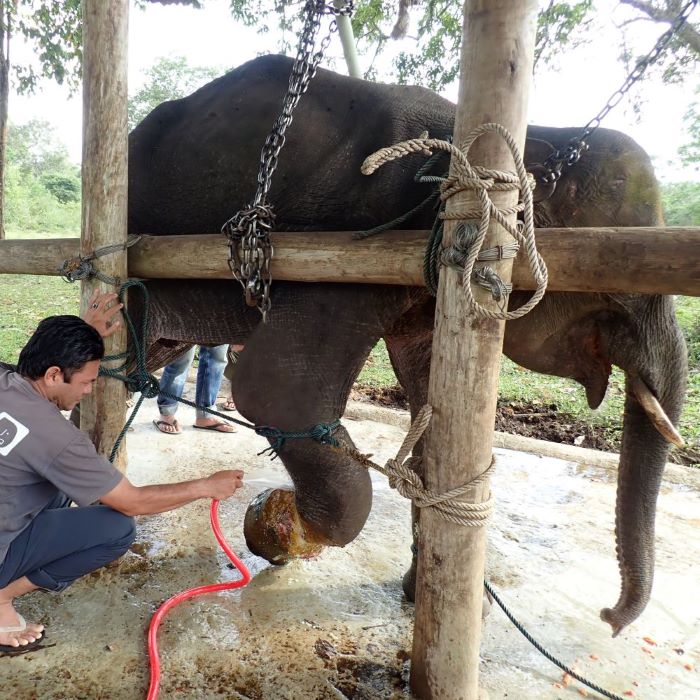 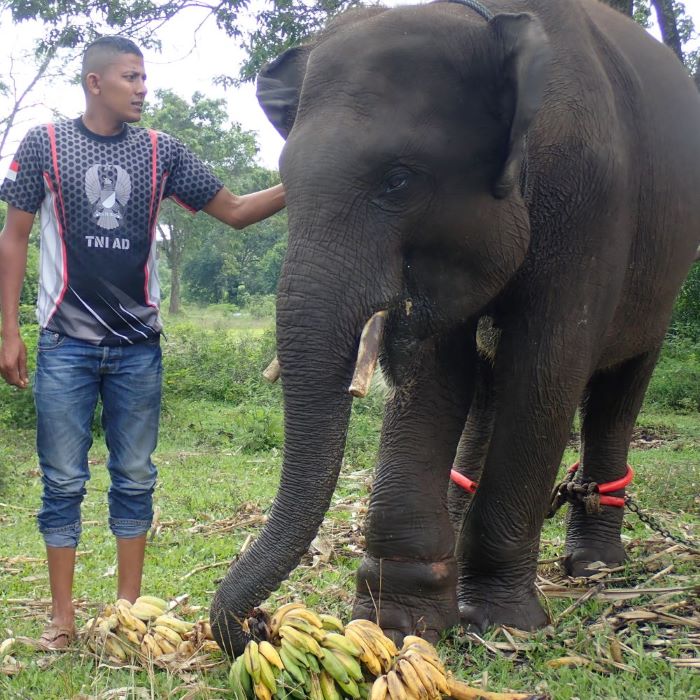 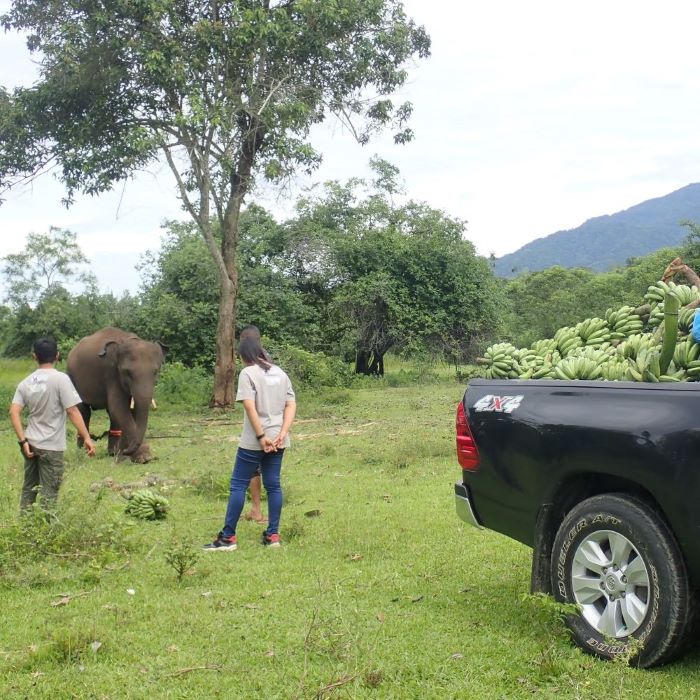 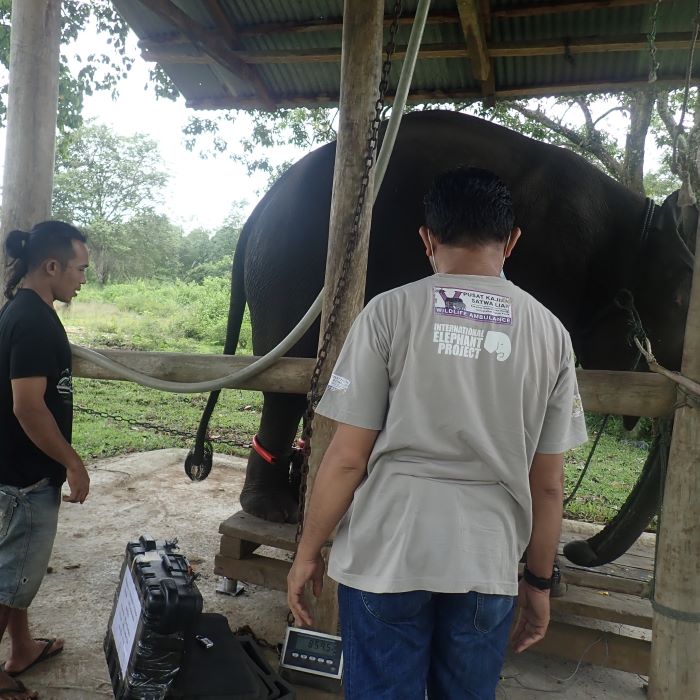