Saving the herds of Way Kambas

The elephant herds of Way Kambas are dying out. This is a unique population of 180 Critically Endangered Sumatran elephants, but in the past fifty years, nearly all the breeding bulls have been killed by poachers for their ivory. This population lives within a national park that has legally protected status, which gives us a fantastic opportunity to save them from poaching. 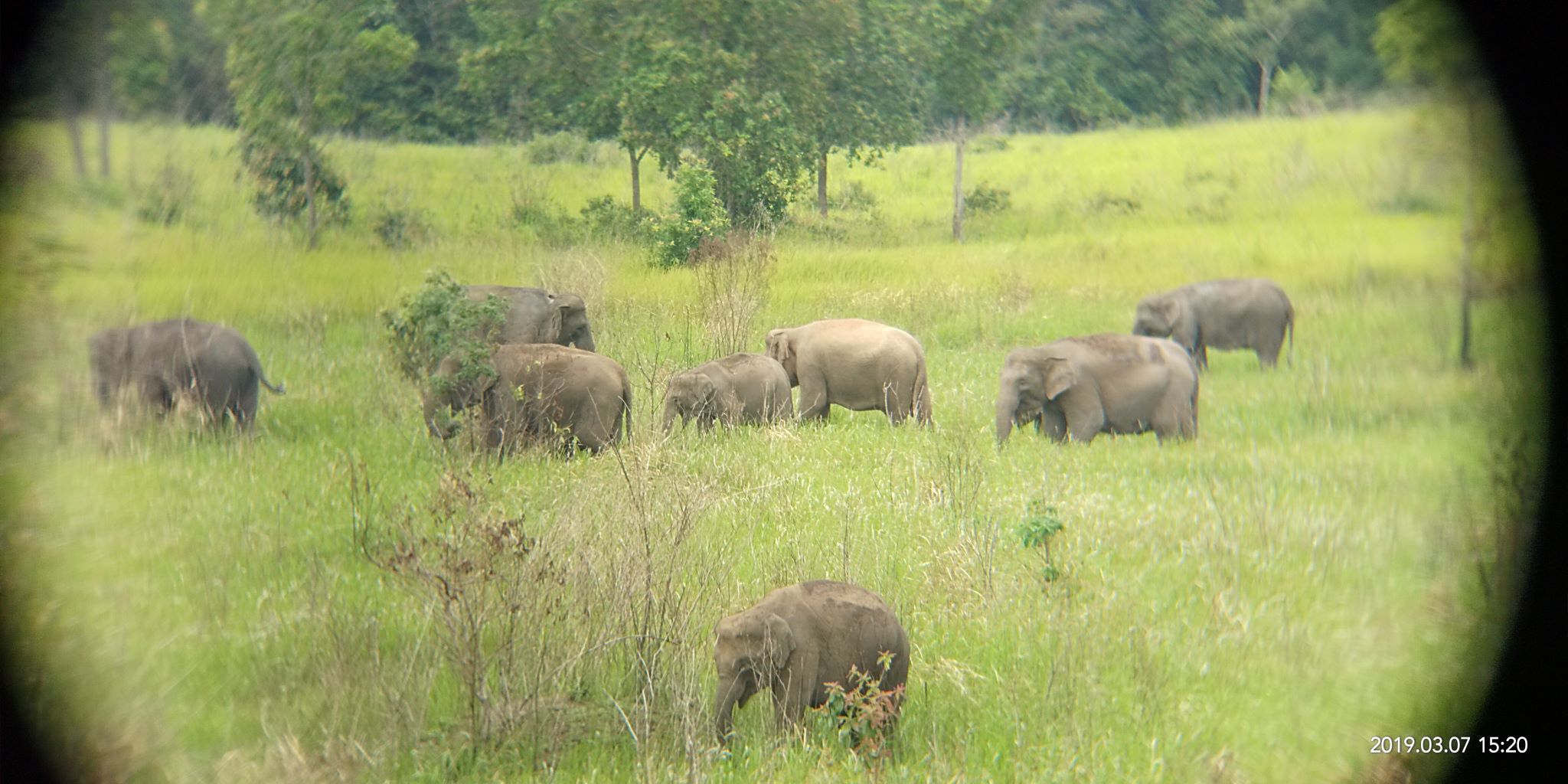 But without more babies to repopulate the herd, all our anti-poaching efforts may not be enough. The fact is, there is only one remaining breeding bull – Dugul. One breeding bull is not enough to ensure these herds survive. Unless we act now, this vital population will decline until only a few elephants remain. This would be an immense tragedy. But we can do something about it!

To help repopulate these herds, we’re taking on a huge, complex challenge – moving two young bulls from a forest nearly 600 kilometres to the north.

The hope is that when these two bulls have been moved and adapted to their new environment, they will help the Way Kambas herds repopulate. They’ll also expand the genetic diversity of this vital population of Sumatran elephants.

Your donation will help us secure the future for these herds.

Our team in Bukit Tigapuluh (BTP) in central Sumatra has identified two young bulls who are perfect candidates for transfer. Their names are Rahmad and Saleh, and they were chosen because they are in their ‘dispersal phase’. This means they have left their family groups and are already roaming the forest and local farmland in search of a new home and females to breed with. The populations in BTP have benefited from years of protection from the Wildlife Protection Units that we fund. There are many young bulls in this area, so the removal of these two bulls will not adversely affect the BTP herds. 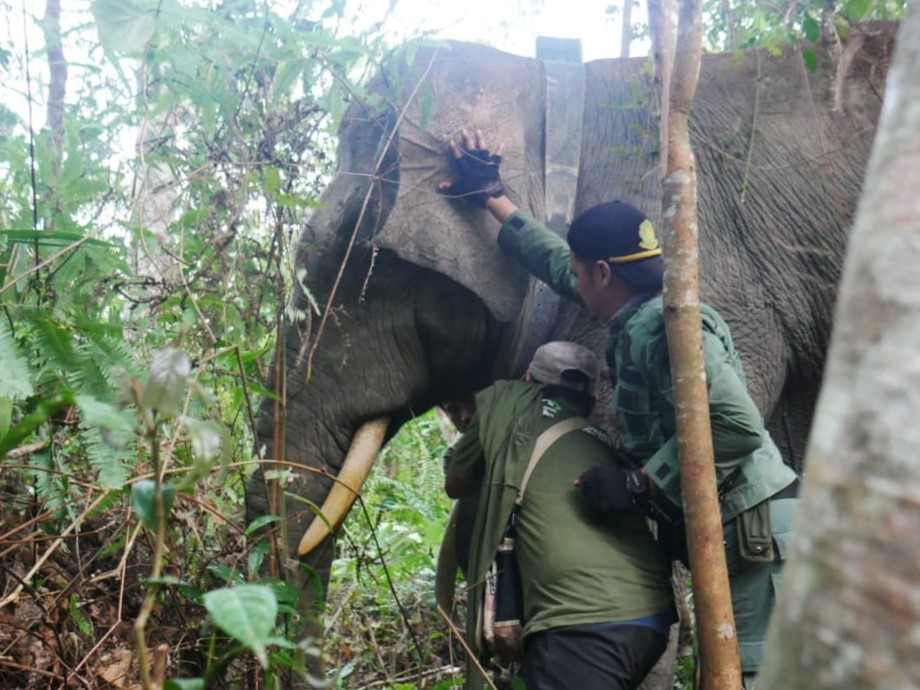 Above: the team in BTP installing a GPS collar around the neck of Rahmad, one of the bulls we're moving to Way Kambas

Most Sumatran elephant populations are isolated from each other, surviving in the fragmented forests that remain on the fringes of cities and agricultural areas. Many years ago, before people tore down the forests and built cities, villages and roads, young bulls like Rahmad, Saleh and Dugul would have easily roamed far from their family groups and found new areas to settle.

Now, to ensure genetic diversity and reduce inbreeding in the Way Kambas herds, we must intervene by physically moving these two young bulls. The journey will be stressful for all involved, as it is a long way from Bukit Tigapuluh in central Sumatra to Way Kambas in the far south of the island.

Translocating elephants is a complex and risky procedure. However, with the highly skilled and expert team involved, we are confident that the move will be successful and will provide new hope to the elephants of Way Kambas. Highly skilled and trained wildlife vets will be on hand to care for Rahmad and Saleh, with other staff available to provide food and water,  spray water on the elephants if it’s hot, and move them on and off the truck.

Donate today to help us safely move Rahmad and Saleh to their new home.

After they are released into their new home, Rahmad and Saleh will go through an orientation phase, where they will explore the forest, the forest borders, and the surrounding farmland. They will also ‘introduce themselves’ to the females in the national park.

It is crucial that we monitor them, which we will do through their GPS collars that were attached a year ago. Dugul also has a GPS collar, and we’ll keep a close eye on all three to track when and how they interact with each other and the herds. We also need to monitor these bulls as ivory poachers are never far away. 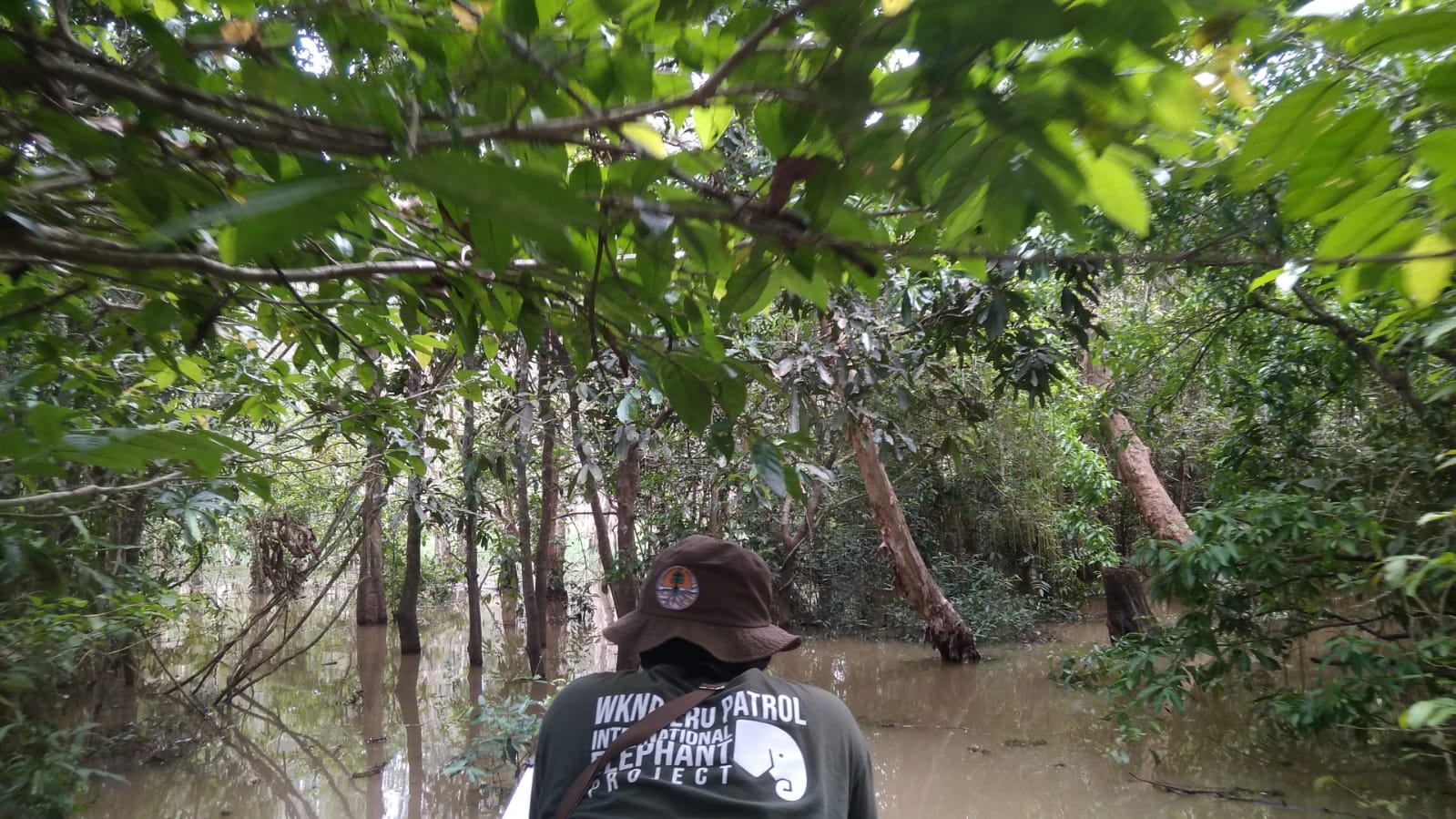 We have a powerful, active and effective team of rangers working within the Way Kambas National Park. The River Patrol Unit is extremely diligent in patrolling the national park, removing snares and traps, recording evidence of illegal logging, and confronting poachers and hunters. They have been instrumental in ensuring the arrests and convictions of wildlife criminals in the past couple of years.

With your support and the work of our rangers, the bulls and all elephants in Way Kambas will be safer than ever before – and their numbers can start to recover.

Your gift will help fund brave ranger teams to protect all three bulls.

Below left: Wildlife Ambulance veterinarian Dr Christopher Stremme installing the GPS collar on Dugul
Below centre: Rahmad and Saleh in the Bukit Tigapuluh forest in central Sumatra
Below right: Dugul (with the collar around his neck) with one of the Way Kambas herds 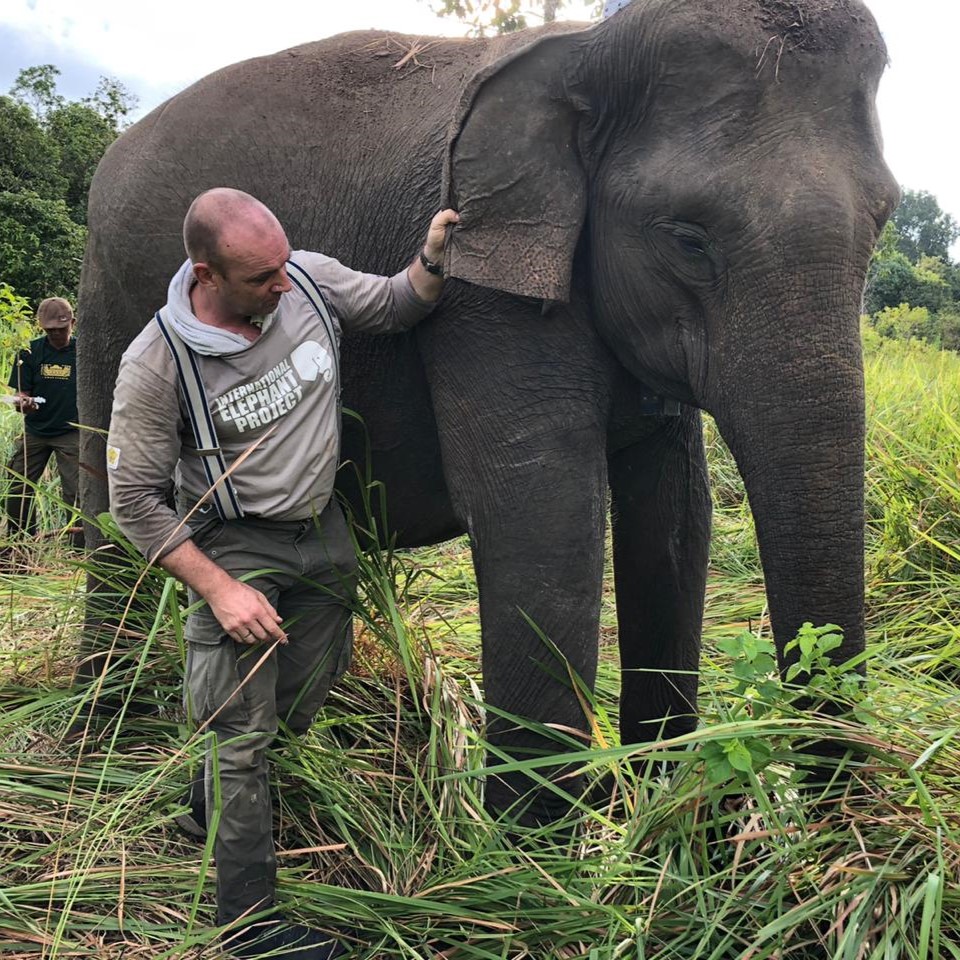 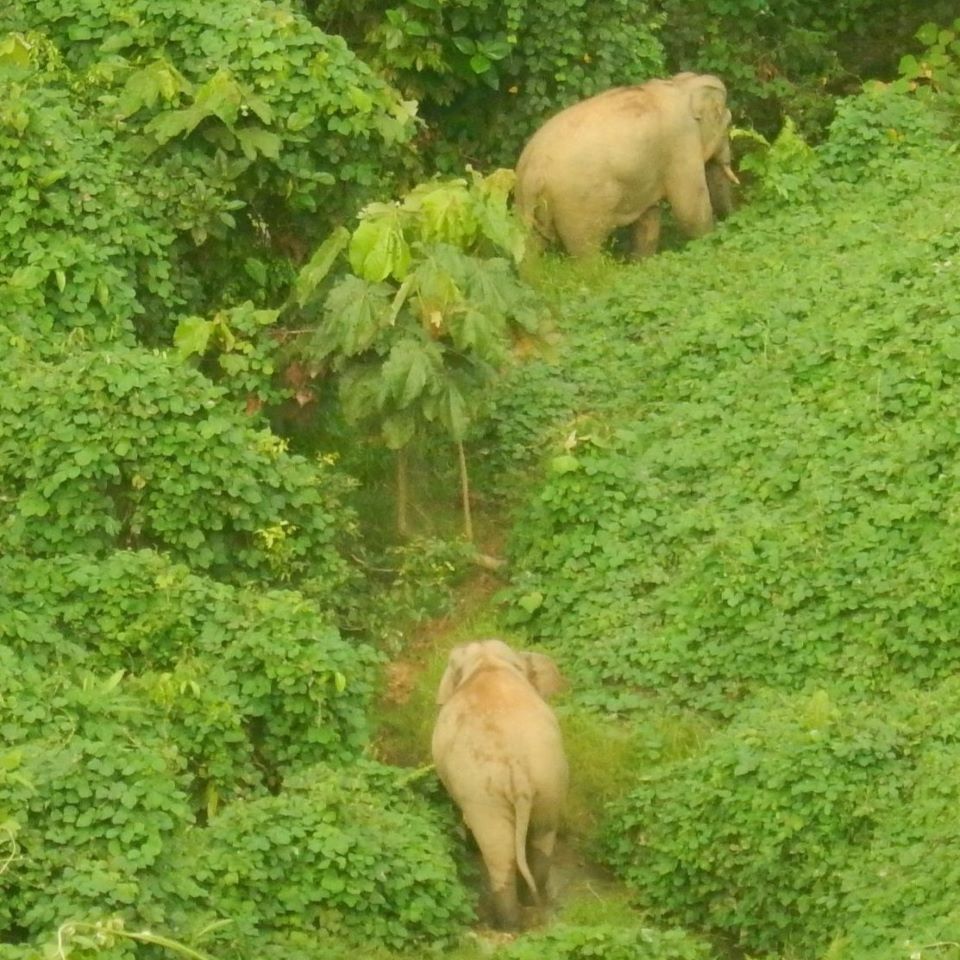 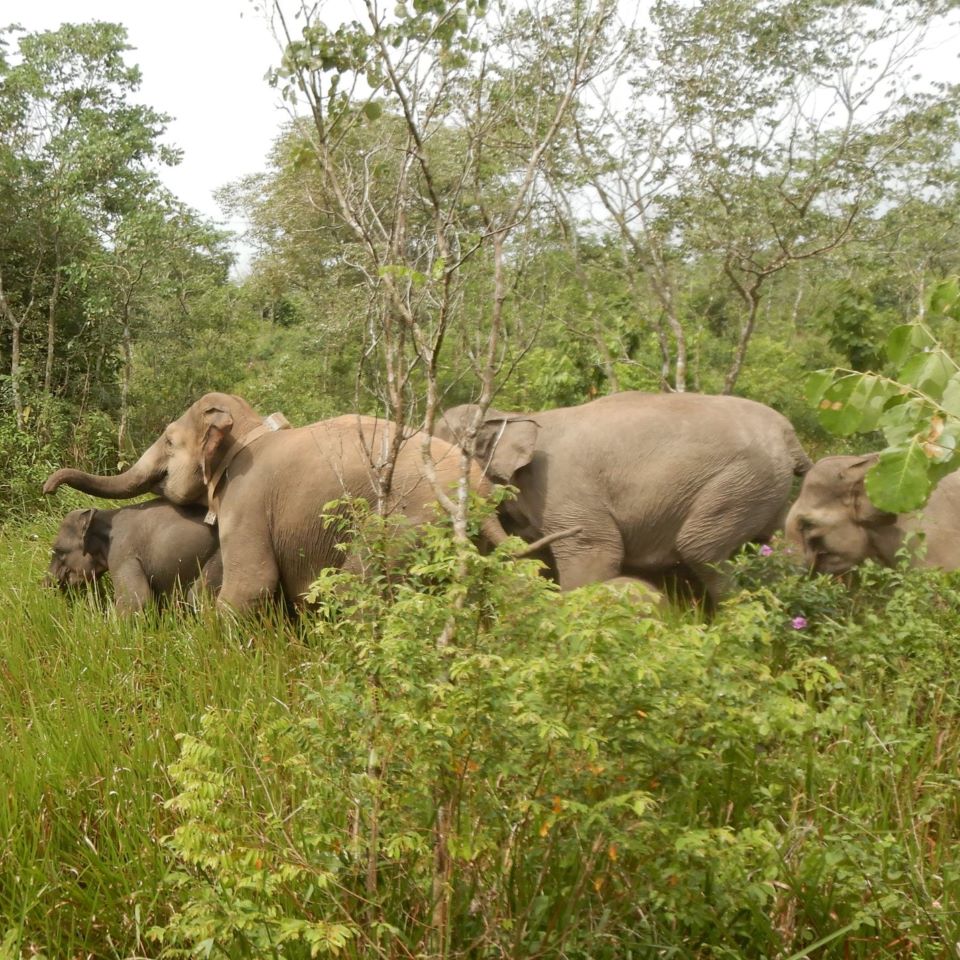